Cryptocurrency has come on the scene in the last five years or so and has really taken off. More people than ever before have been keen to get involved with coins such as Bitcoin and Ethereum, and there has been a genuine interest developed in the technology behind cryptos, known as the blockchain.

The crypto trend, which includes blockchain technology, has because so big that everyone wants to get in on the act where popular culture and entertainment are concerned, and this has led to Booming Games, a leading slot game developer devising the game we’re checking out today in Blockchain Megaways.

In Blockchain Megaways, a 6×6 video slot, Booming Games attempt to deliver a game inspired by blockchain technology but in a fun and colourful way. And, as the game has high volatility, it means that there are some excellent prizes up for grabs, with a top payout of 40,320x more than enough to keep players satisfied as they spin the reels.

The game’s design focuses on the theme, which is the blockchain, or the idea of the blockchain, because nobody will have seen it first-hand. So, you could say that Booming Games present the blockchain as they and others expect it to look, with a Matrix-style background setting the scene.

In many people’s eyes, blockchain is the future, and the technology can still be described as futuristic, and this is something else that Booming Games get across in the design. You can expect to see neon colours feature throughout, be it on the icons or around them. And the layout moves away from slot tradition, too, in a way, with an extra four symbol row added above the game area.

If you’re making a video slot about the blockchain, then cryptocurrencies are going to be involved as it’s they that make use of blockchain technology. Most of the icons in the game are crypto symbols, but more on that later.

As Booming Games is a respected software developer, Blockchain Megaways will likely be available to play at some of the top online casinos on the internet today. Many operators are keen to work with Booming Games because they’re renowned as innovators who regularly produce fresh and unique content for gaming platforms.

Another exciting element of Blockchain Megaways is that the game’s theme is, of course, the blockchain. And because there are many reputable crypto casinos out there, all of which welcome content from Booming Games, it could make sense to play this release on a dedicated crypto platform. It would be quite fitting when you think about it.

Blockchain Megaways also includes the exciting Megaways system, and as many of the top online casinos have dedicated Megaways sections because games using the mechanic are so popular, it’s always a good idea to search out a platform that makes an effort with Megaways titles, as there could be advantages further down the line.

Booming Games released Blockchain Megaways in May 2022, so it’s a game that has been produced using the latest HTML technology. With the online casino industry moving in the direction of mobile, platforms that have been optimised for play on smartphone and tablet will be ideal to enjoy this slot, as it too will look and feel the part on smaller screens.

What is often the case with video slots is that developers stick to what they know works, which is fine. But in Booming Games’ case, this isn’t how they play things, as seen with the blockchain inspiring this specific release. And, it can pay dividends for players, too, as it’s possible that, because it’s a game with a unique theme, there will be Blockchain Megaways No Deposit bonuses and Blockchain Megaways Free Spins, especially for new players, and more than likely on sites that give cryptos the thumbs up.

Why Blockchain Megaways Is So Popular?

There are a number of reasons why Booming Games’ Blockchain Megaways has come on the scene and been an instant hit in terms of popularity, and one of those reasons is, of course, because of the massive interest in blockchain technology. At the time of writing, you could go as far as to say that blockchain tech is more popular than cryptos, with people keen to see how blockchain can benefit them.

So, you have the above angle as one of the primary reasons and then Blockchain Megaways as a slot game itself. Of course, including the Megaways system is always going to be a positive due to the huge number of ways to win that are possible from spin to spin. And, with up to 200,704 paylines, you can certainly see why Megways is a positive.

Another outstanding component of the Blockchain Megaways slot is how Booming Games have taken the theme and really delivered on it in the visuals. We don’t know what the blockchain looks likes, but the inclusion of a Matrix-style background will fit with what most people imagine, and the consistency of the theme via the graphics is well thought out. 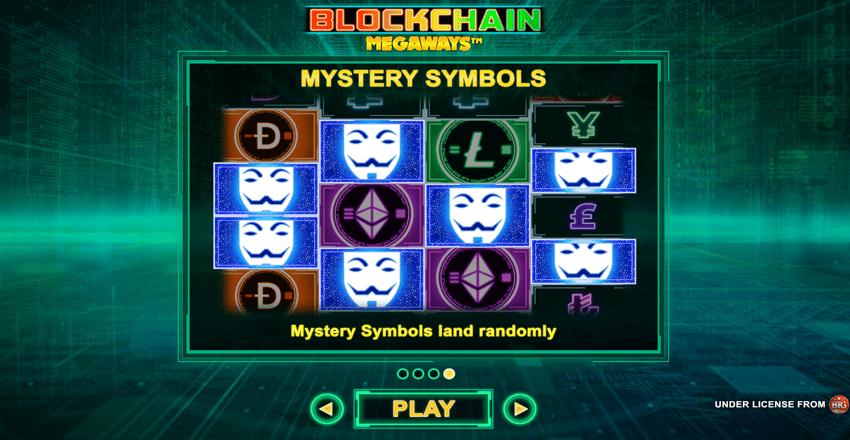 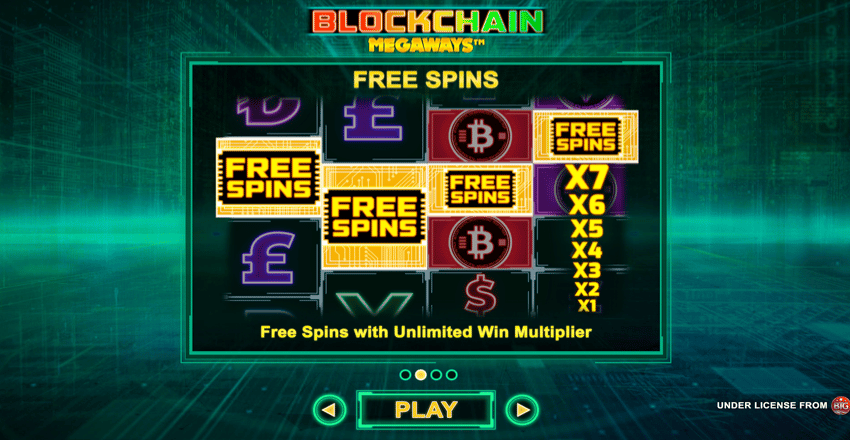 The return to player in Blockchain Megaways, often referred to as the RTP, comes in at a maximum of 96.50%. It’s a very good level of RTP to go with, and hits the industry average. Yes, it’s possible for an RTP to be higher, and players naturally want one that is as high as possible, but 96.50% gets the thumbs up here.

Blockchain Megaways has six reels in total, and on them are icons that all tie into cryptos and currency. But what else would you expect from a game that takes inspiration from blockchain technology? You can expect to see the symbols of popular crypto coins such as Bitcoin and Ethereum, which is going to give this game some serious appeal.

Booming Games also introduce a special symbol in the form of a scatter. And, as you will expect, the scatter is crucial if the player spinning the game’s six reels wants to get their hands on some free spins.

We mentioned the scatter at the end of the previous section, and now we’re going to tell you a bit more about what it can do. Because, let’s face it, who doesn’t want to have some free spins to play through, right? Unlike most traditional slots, punters will need four scatters in view, rather than the standard three, to trigger the free spins bonus round. And on starting it, they will have ten free games to spin through.

The ten free games may appear slightly miserly, but in reality, there is a lot to gain because in any of these free spins, if another four scatters are collected, the player is going to see an additional five free games added to the running total.

As well as the traditional free spins bonus round, there are also the Cryptocoin and Collect features. The crypto coin will show differing values, and everything hinges on where it lands on the screen. The values will then be scrambled, and the barcode will collect the matching icons, paying the punter the amount due.

There are demo versions of the game available for players to enjoy.

There are a couple of bonus rounds, including the free spins bonus game.

The top payout in a standard spin is 40,320x the active stake.

Blockchain Megaways was released in May 2022.

This slot is playable at all the top online casinos and crypto gaming sites.

Hi everyone, I’m a huge slots fan. I’ve been spinning for over a decade and have plenty of experience when it comes to slot machines. My other passion is writing, and I combine the two to give you clean and transparent guides and reviews that I hope you find helpful.